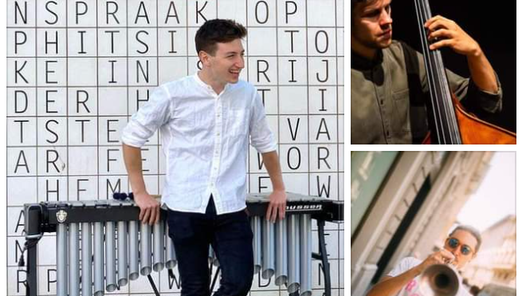 Ce samedi 3 septembre tout en jazz et en trio! Concert gratuit en extérieur, sur le parvis de l’Église Réformée Wallonne de La Haye (Noordeinde 25)
Samedi: 14h -16h
Jazz Niccolò Angioni (trompette), Marco Ullstein(vibraphone:) et Robert Stratmann (contrebasse).
Les musiciens:
Niccolò Angioni is an Italian jazz trumpet player based in The Hague (NL) and Florence (IT). He studied in conservatory of Florence, Rovigo and The Hague and he’s active in the professional music scene since 2012 with a wide experience from jazz duos to big bands and even symphonic orchestras and DJ sets. His first single called “Dancing with the Illusions” was released in August.
Visit www.niccoloangioni.com for more.
Marco Ullstein has his roots in Italy and Germany. After his classical music studies in Munich he moved to The Hague to start studying Jazz Vibraphone. Since then he can be heard and seen in different projects and bands.
Robert Stratmann, is a young german bassist who studied Sound Design and Music Production at the hdpk in Berlin and worked with bands and musical ensembles of various musical styles in Berlin. After a few celebrated releases with his project “Aeroglyph Collective” he decided to leave Berlin to continue his musical journey in Jazz in the Netherlands at the Royal Conservatoire, The Hague. Recently he is developing his Contemporary Jazz Project, the “SWL trio”, in which he is also active as a composer. Robert plays both instruments, the Electric Bass and the Double Bass.